Cultural Leadership held our annual Black Culture and Identity Program on Sunday, February 6. This program is usually heavily based in history and the Black experience between the Trans-Atlantic slave trade and the civil rights movement, and this year facilitators decided to diversify the curriculum in a way that centers a range of lived experiences. Students heard from Dr. Katrina Thompson Moore on early African & African American history, and Senior Facilitator Stephanie Briggs on Black Feminism.

For the first time in history, Cultural Leadership held a panel on Black Identity, and invited guests to discuss questions like, “What were you told about Blackness growing up, and how did it shape your upbringing?” and, “How have your identities influenced where you are now, your career goals, and the legacy you want to leave behind?” Panelist & Software Engineer Roger Jones grew up with aspirations to be an engineer like his father, however, he was often dismayed when his father would share that he couldn’t hire a candidate due to their hair being styled in dreadlocks, as his workplace viewed natural Black hairstyles as “unprofessional.” Roger decided that he would become a successful engineer that wears his hair locked with confidence, and he has done exactly that! This program helped students explore and understand Black Identity, and provided notions of self-actualization and validation. Program participants are eager to hear from Student to Student and others at our Jewish History and Culture session on February 27! 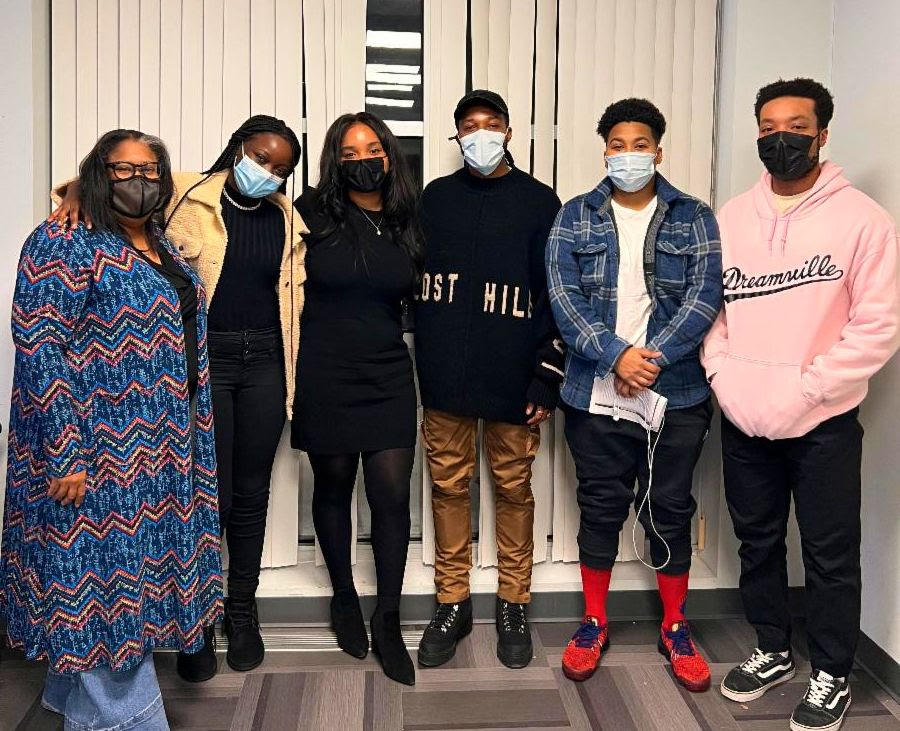 We are thrilled to announce that Cultural Leadership has relocated, and moved on up to a deluxe office suite on South Grand! Our building offers a beautiful covered rooftop terrace, and we can’t wait to welcome visitors in the coming warmer months! In addition, 17 years into our program, we now have more full-time staff than ever, and are all excited to give our best to Cultural Leadership as we enhance our program and expand our reach! Our full-time team primarily focuses on the development of our organization, fundraising, and the management of our student programs. In addition to our full-time staff, we are joined by Nosa Ali & Zoey Fleischer (Facilitator Fellows), Phil Hunsberger (Senior Facilitator), and Kaylan Holloway & Kurly Taylor (Parent Facilitators) who support our High School Program. Our mantra in the office is, “Teamwork makes the dream work!”

Did you know? Missouri Bill 952 proposes that “Critical Race Theory” should not be taught in schools that receive state funding, and if passed, individuals could sue institutions that, “Employ immutable, inherited, or typically continuing characteristics such as race, income, appearance, religion, ancestry, sexual orientation, or gender identity to:

(a) Perpetuate stereotypes; and

on any such stereotypes or characteristics”

Class 17’s Cha Cha Rubin testified against the bill at the State Capitol. “Forming my own opinions with the information given to me is crucial. I want to be able to grow in an environment with conflicting views and be able to talk about that. Knowing the past and present is something that should be provided to everyone.” explained Cha Cha.

Cultural Leadership Senior Facilitator, Phil Hunsberger, founder of Educational Equity Consultants, an organization Bill 952 seeks to bar from Missouri schools as an entity “implementing Critical Race Theory,” is not deterred by this proposed censorship. “The danger of ‘Critical Race Theory’ in its extreme, is that we are attempting to continue to white-wash history. Even though our history has its flaws, when we avoid telling the truth, it makes us avoid changing how we do things,” Phil says, “I have great faith in young people, and believe when given the truth they make the right decisions.” Considering the work Cultural Leadership does, Phil has seen young people become more empathetic and their thinking become more acute when engaging with this material, and feels Bill 952 is an insult to their intellect. We are proud of Cha Cha and Phil for standing up and taking action, we encourage you to educate yourself and form your own opinions about this bill! You can read it in full here: Missouri Bill 952

Cultural Leadership welcomed Class 17 for our Opening Retreat over MLK weekend! For the first time in two years, students were able to gather as a full group at their first retreat, and share their perspectives in a safe space. Class 17 built their village on the concept of “Ubuntu” (a Zulu word meaning, “I am because we are”), and opened their minds and hearts to their peers, as they offered personal experiences, support, and validation during the fishbowl and “Schmutz” facilitations.

Following the Cultural Leadership Opening Retreat tradition, students participated in religious services via Zoom, as they could not attend in-person gatherings. Facilitator Fellow, Zoey Fleischer, led Havdalah on Saturday evening, and students sang “Baruch Atah, Adonai, Eloheinu, melech ha’olam, borei p’ri hagafen,” as Shabbat came to a close. On Sunday morning, CL welcomed Reverend Allen Perkins of Greater Mount Carmel Missionary Baptist Church. Students engaged in a conversation about the history of the Black church, the meaning of Sunday service, and how praise & worship varies based on individuals and denominations.

Class 17 engaged in a bit of fun during the retreat, as we hosted our first Cultural Leadership “Riff-Off” (a singing competition), and even engaged in a couple games in their downtime! Students shared how enlightened and connected they felt as we closed the retreat and reflected on what they learned about themselves and their village. We have a great group this year, and are so excited to see the amazing things Class 17 has in store!