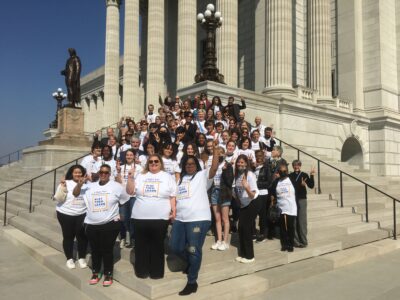 On Thursday, March 3rd, Cultural Leadership staff, students, and alumni packed into a series of vans to start their journey to the state capitol. The organization was partnering with the Missouri Educational Equity Partnership and the Jewish Community Relations Council for a day of lobbying to combat Missouri House Bill 1995, the “Parents’ Bill of Rights for Student Well-Being.” The bill is part of a nation-wide surge of reactionary laws combating schools’ ability to teach controversial topics, usually systemic oppression and racism beyond slavery and the Civil Rights Movement. As with many bills that fall under the same umbrella, the initial version of HB 1995 positioned itself as banning Critical Race Theory, a legal theory developed in the 1970’s as a critical framework to examine the intersections of race and the legal system that re-entered the public discourse during the build up to the 2020 presidential election via right-wing media commentators and conservative campaign promises to ban the theory. Despite fear tactics about a surge of Critical Race Theory in high schools, advocates against these bills argue that the supposed surge is non-existent.

“This whole notion about Critical Race Theory is absurd and the propaganda around that has been done by right wing extremists who work from the standpoint of fear,” said Phil Hunsberger, Cultural Leadership’s lead facilitator and co-founder of Educational Equity Consultants, an organization that was directly named in the first version of the bill. “There’s not a school in this country that teaches CRT in high school, certainly not in Missouri.”

Despite the absence of the theory in high school curriculum, activists are concerned about the wide reach and vague phrasing of these bills. While the text of HB 1474, the precursor to HB 1995, did specifically cite Critical Race Theory, it defines the theory incredibly broadly as “any curriculum that identifies people or groups of people, entities, or institutions in the United States as inherently, immutably, or systemically sexist, racist, biased, privileged, or oppressed.” HB 1995 avoids mentioning Critical Race Theory specifically, but makes similar overtures to any curriculum discussing systemic oppression and privilege. If parents feel a teacher’s curriculum is violating the bill, they would have license to object and even sue the school, impacting all its students’ education, not just their own child’s.

“As a student, I wouldn’t want my education to be lessened because a parent decided that they don’t want their student learning some particular subject,” said Cultural Leadership alumna Alexia Nastia while lobbying Representative Phil Christofanelli (R). 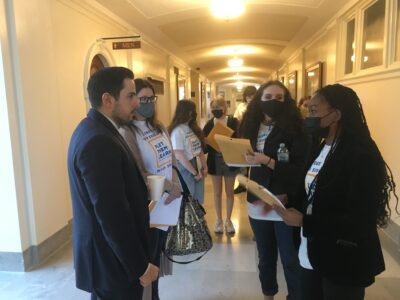 In addition to expressing their concerns about individual parents gaining such significant power over curriculum, students also used their conversations in the halls and offices of the state capitol to explain why honest discussions of their county’s history of systemic oppression is so important to them. In the same conversation outside of Representative Christofanelli’s office, current Cultural Leadership student Charmaine Chinodakufa shared her perspective on the importance of honest portrayals of America’s history. “It still impacts us today. It’s not just our history. The society we have right now is because of the society we had back then and so ignoring that is not going to help us to make this generation and the next generation better to avoid the mistakes of the past.”

Proponents of these bills fear that honest portrayals of a history of systemic oppression will divide students and create a hierarchy of guilt and victimhood, but educators with experience in anti-racism work disagree. “For 17 years I’ve been working with high school students and over those 17 years I’ve found if I speak honestly and openly to students, they become that much more open with one another,” explained Phil Hunsberger. “It doesn’t incite hate. The product of being honest about our history and what oppression is engenders a type of empathy for each other.”

Despite mixed reception from lawmakers, students valued the chance to share their views and interact with state representatives as they deliberate on this legislation. “We came to the capitol to try and advocate for education equality and inclusive education. It’s a really great experience because you really get to see that these representatives are just normal people, they’re completely normal people. You just go up to them and talk – that’s their job; you have a right to talk to them and share your voice and really get your side heard. I recommend it,” said Class 16 alumnus Jonas Wall. 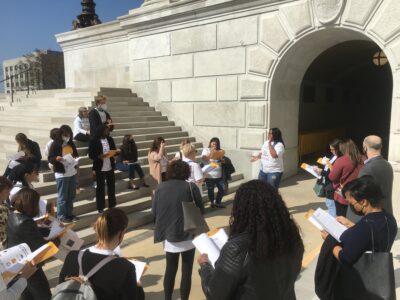 Although not every representative seemed to share the students’ perspective, many did concede that the bill presented significant practical issues and caused substantial public outrage. Representative Ron Hicks, a Republican on the education committee, explained where he ultimately thought HB 1995 would fall. “I’m a simple person; I work off of the majority. So far from what I’ve seen, the majority is on your side.”

While the majority of Missourians do not support the implementation of such far-reaching educational content bans, it is exceedingly easy for politicians to push them through the legislature unless people step up and voice their dissent. In each conversation students had with lawmakers, whether or not they changed the individual’s mind, they showed that there are people who will be impacted by these bills, who oppose them, and who are ready to show up and make noise for the causes they believe in. Cultural Leadership students’ willingness tostand up, speak out, and take action will continue to serve them and their communities well as they advocate against injustice anywhere, from the streets to the state capitol.